Natural dyes derive from three sources; minerals, animals/insects and plants. All the black dye used in our block-prints is a mineral dye made from scrap metal. We’ll explain how that is made in a future blog post. Arguably the most famous natural red dye is made from crushed scale insects. The name of this South American insect, which contrary to common belief is not a beetle, is cochineal. The natural dye we wrote about in our last blog post is a plant: indigo, which turns our fabrics (and hands) a beautiful blue. The majority of natural dyes are plant-based and in this post we’ll be taking a look at one which turns fabric varying shades of red. It is madder root.

There are three types of madder commonly used for dyeing purposes; Rubia tinctorum, Rubia peregrina and Rubia cordifolia. Rubia tinctorum and Rubia peregrina, known as dyer’s madder and wild madder respectively, are found across Europe and North Africa. The madder cultivated in India is Rubia cordofolia, also named Indian madder. Although all three types contain two colourants, alizarin and purpurin, they have different make-ups and as a result produce varying hues of red, from blueish to purplish tones. Once the plant has reached maturity which takes around 3 to 5 years, the roots, which contain the pigments, are harvested. The roots are washed to remove any soil and dried in the sun. At this stage the roots are ready to be used or alternatively they can be completely dried out and ground into a powder for use at a later date. In Kutch it’s more common for dyers to use fresh roots.

You’ve got some cotton, you’ve dug up some madder root - what do you do next?

Like most natural dyes madder root requires a mordant. In order for the dye in madder root to fix itself onto cotton and remain there, you need to mordant the cotton beforehand. The substance which is commonly used is alum and there are two ways of applying it. One way is to soak the cotton cloth in its entirety in a bath of water and alum. This is the method for when madder root is the predominant colour. After soaking the fabric in the mordant you can print a colour or a resist on before proceeding with the madder root dye. However, in traditional Ajrak block-printing, as we’ve explained in the past, it’s all a little more complicated. Madder root dye is used in combination with other natural dyes, it isn’t the predominant colour and it is applied in a pattern not as a uniform dye. Therefore the other way of applying the mordant for madder root dye is to either to block-print it onto the cotton or brush it on. In order to make a mordant which can be block-printed onto a cotton, you boil water, alum, clay and tamarind seeds. The tamarind seeds turn it into a paste which can then be printed on. After mordanting the dye is prepared. A large non-corrosive pot is set over a fire. It’s filled up with water and plenty of chopped up madder root with a little alum added. The pot is then heated to around 60℃ and held there for an hour. It is now ready for dyeing. The mordanted cotton is submerged in it and left for 1 to 2 hours with the occasional stir.

There are a number of factors which will affect the final hue of the dye:

In other words, it takes experience and experimentation to obtain consistent results.

What about a synthetic version?

Madder was a hugely sought after dyestuff and as with indigo there was a race on in the 19th century as to who would become the first person to synthesise it. Of the two colourants in madder root, alizarin and purpurin, alizarin was favoured for synthesis over purpurin not least because of its superior fastness. In our blog post about indigo we mentioned William Henry Perkin and BASF. The British scientist William Henry Perkin discovered mauve, the first synthetic dye, and BASF was the German company which patented synthetic indigo. Perkin and the duo Carl Graebe and Carl Liebermann at BASF were again battling it out to be the first to the patent office with a recipe for synthetic alizarin. They both ended up submitting patents for a synthesis. Famously BASF submitted theirs exactly one day ahead of Perkin. That was in 1869. By 1871 the market was flooded with synthetic alizarin.

The dyers in Kutch use a lot of synthetic alizarin these days. It’s used in exactly the same manner as madder root. They can use synthetic alizarin and madder root interchangeably. Their set-up and mordants therefore allow them to use natural madder root if a customer so requests. Alizarin, however, is the more popular choice because it’s significantly cheaper and the results are more consistent. 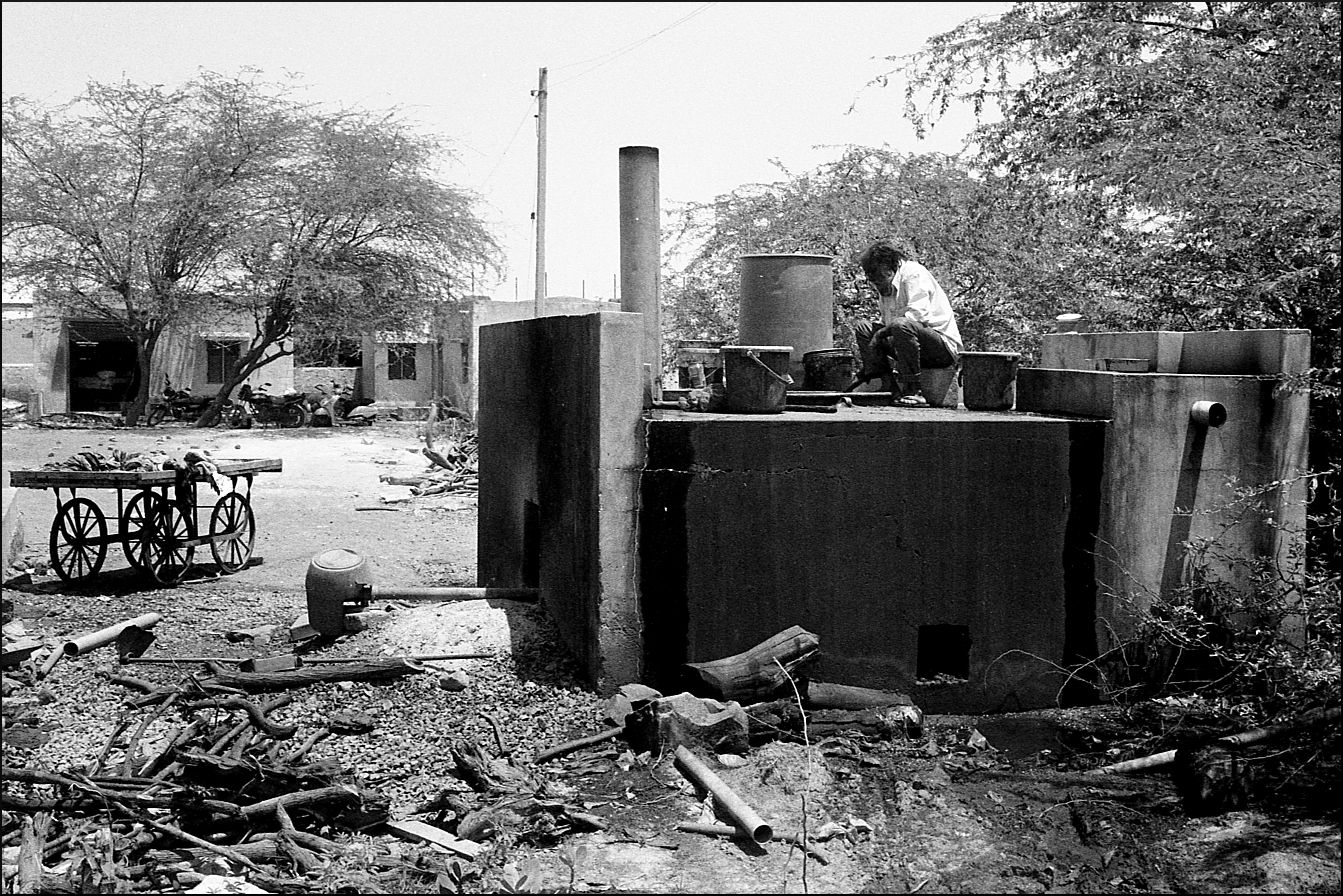 A dyer in Ajrakhpur stirring a vat of madder root