An Introduction to Handloom Weaving

In previous posts we have looked at different sorts of cotton and why we are especially interested in Kala cotton, the original Indian species. In this post we’d like to give you an idea of how the artisans of the Kutch region weave their cotton.

Weavers use looms, and over the centuries different models have been designed. The Industrial Revolution saw the development of power looms, but traditional weavers use hand looms, and in Kutch the type of hand loom they use is called the pit loom.

Essentially, a loom is a device to interweave thread; more specifically a device to interweave threads that are at right angles to each other. The threads that run the length of a piece of cotton are called the warp, and the threads that run across the width of the cotton are called the weft. In Kutch the maximum length of the cotton that they weave is 50m, and the width is typically no wider than 112cm. The warp is stretched, and one end is attached to the loom.

The pit loom, as the name suggests, is partially positioned over a pit, so that the weaver sits in the pit, and the warp is stretched parallel to the ground, and at a short distance above it.

How does the weaving process work?

There are three main actions: shedding, picking and battening; and these are common to all types of weave. Let’s start with the plain weave: that’s the weave that you’ll find in most of our selection of fabrics. The loom has two pedals (also called treadles), in the pit at the feet of the weaver. The pedals are attached to harnesses which in turn have heddles (or heals) attached to them. The harnesses hang above the warp and the heddles are suspended from them. The heddles are loops of string which have a single thread from the warp running through them. When the weaver pushes down on a pedal it raises the harness with the attached heddles which in turn raise the warp threads. Imagine that the threads from the warp are numbered. One of the two pedals raises the even numbered warp threads and the other pedal raises all the odd numbered warp threads. Pressing down on a pedal is called shedding because it creates a shed, a vertical space, between the raised and unraised warp threads. Once the shed has been opened, the weaver then has to pass the weft through it.

The weft thread is spun on a quill, a type of spool, which is then placed inside a shuttle. The shuttle is a wooden container which is pointed at both ends, like the hull of a canoe, to allow it to slide smoothly across the warp. In the past the weaver would have pushed the shuttle through the shed by hand. These days they use what is called a fly shuttle. There are two small loose boxes at each end of the weft which the shuttle fits into. These boxes have strings attached to them which are joined together in the middle of the loom. By holding the two strings and jerking to either the left or the right, the weaver can propel the shuttle across the width of the warp into the box on the opposite side. This action is called picking.

The next job is to maintain the tightness of the weft. This is done through battening. The tool to perform this action is called a reed. It looks a bit like a comb. The reed is positioned across the weft, perpendicular to the warp. And it holds each thread of the warp apart. After each picking the weaver pulls the reed towards themselves. Battening ensures that the weft, after it is propelled across the warp, is tightly pressed up against the previous weft thread and ensures that ultimately the fabric ends up strong and tightly woven.

How to create different designs in the weave?

We’ve now seen how plain weave is created, but how do weavers create different effects in their work?

First of all, yarn in different colours can be used. Either the warp, the weft or both can be dyed to create various designs. In our selection we have a simple striped design where half of the warp is of blue dyed yarn. We have red fabric where the warp is dyed but the weft is undyed. This creates a pink effect in the finished product. Similarly, a grey effect can be produced by using black thread in the same way.

Another way to create a more subtle design is by changing the weave. For a plain weave every other warp thread is raised before the weft is passed through the shed. In order to produce different weaves, a different combination of warp threads is raised. For example, you can raise two adjacent warp threads, in other words two up and two down across the warp, called an irregular basket weave. This produces a fabric which feels slightly thicker and is less prone to creasing.

Another classic weave, which we also have on offer, is called twill. There are a number of different styles of twill. Generally a twill weave is notable for its diagonal lines. In order to weave twill the loom requires at least 3 pedals with each pedal raising different warp threads. So instead of alternating between two pedals, the weaver will use a repeating pattern of the pedals. For example; pedal 1 then 2, then 3. Or alternatively 1,2,3 followed by the reverse order: 3, 2, 1. There are many variations, with varying numbers of pedals. The resulting designs vary from zig zags (called herringbone) to diamond shapes. 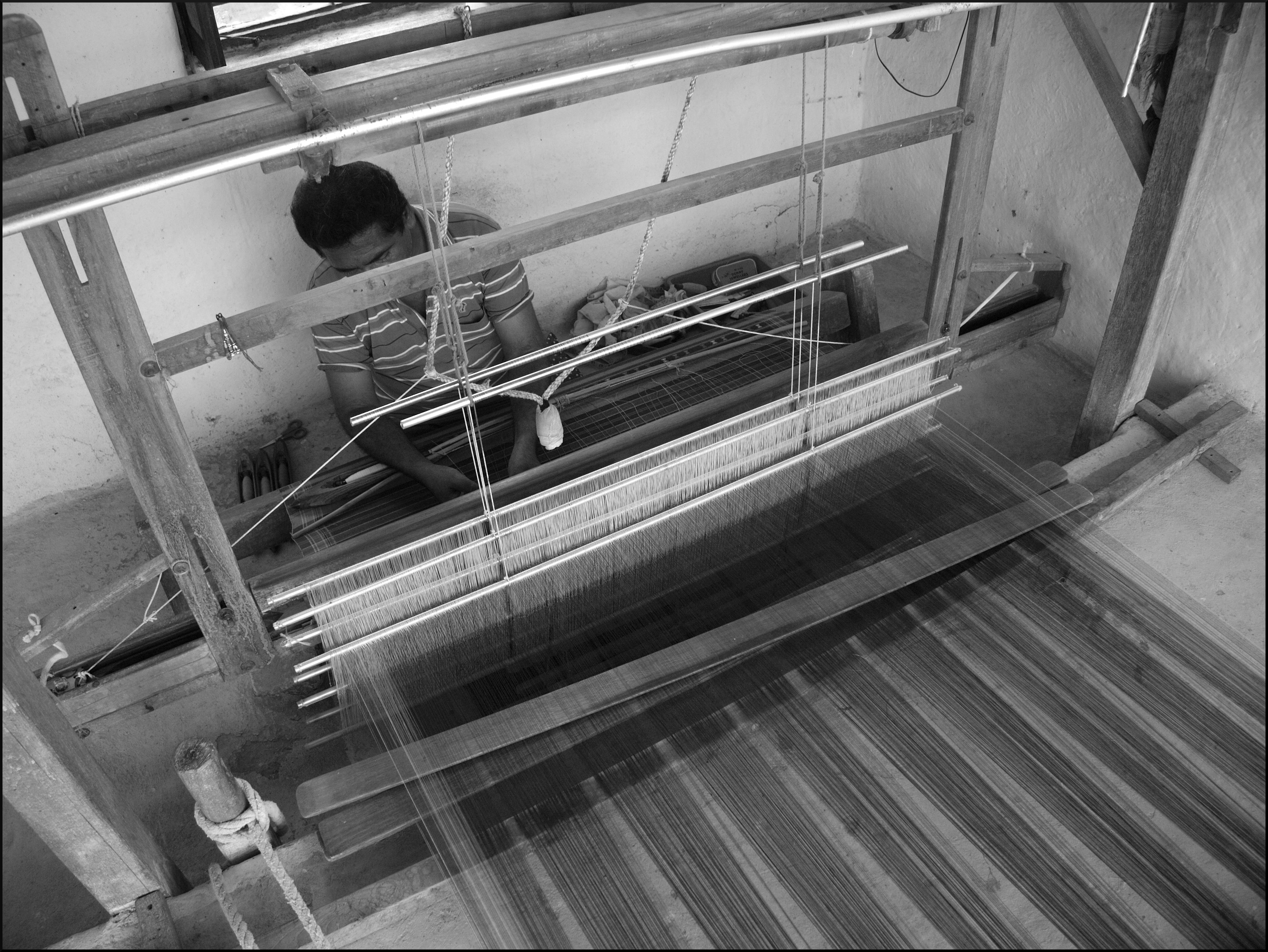 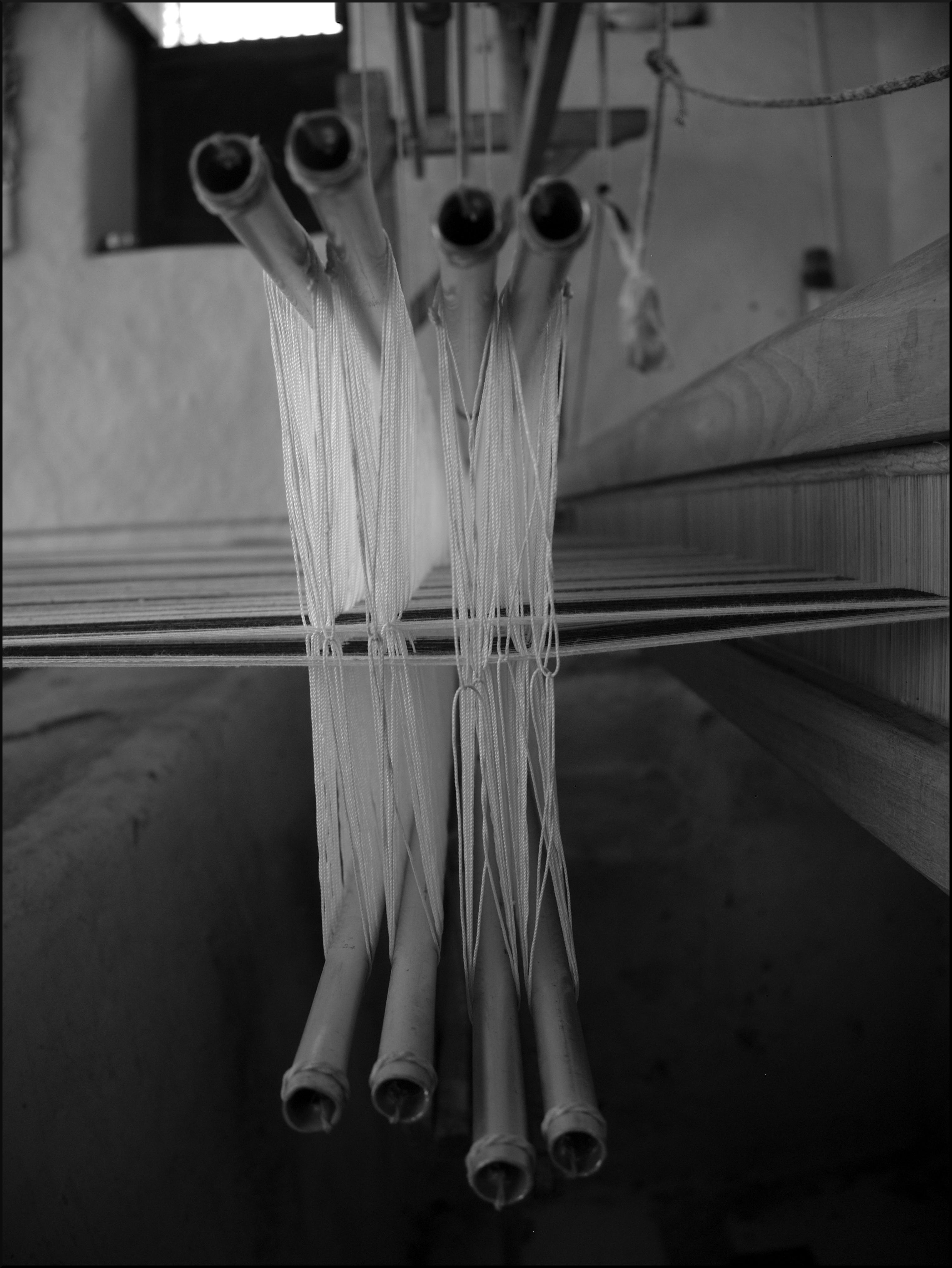 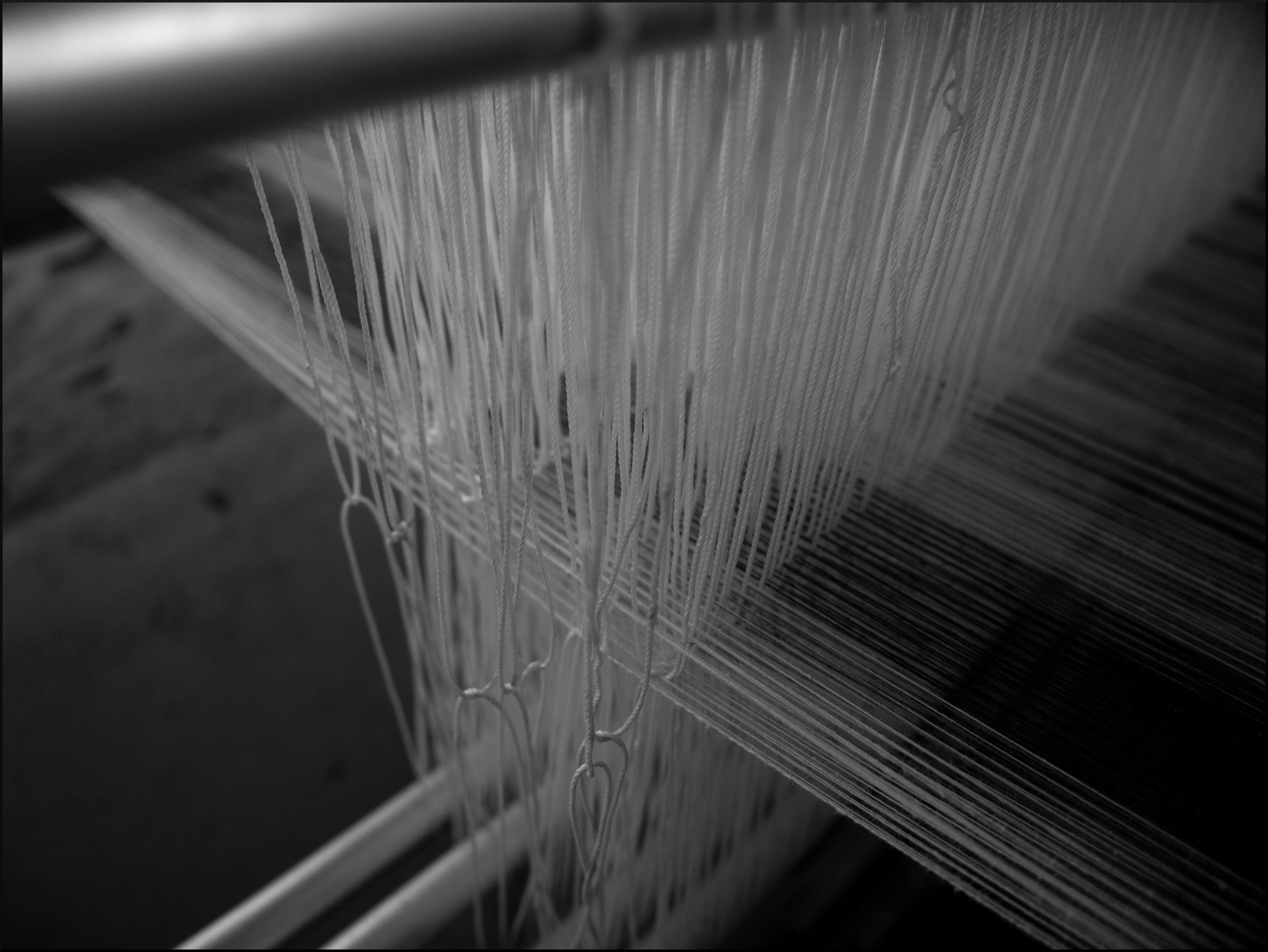 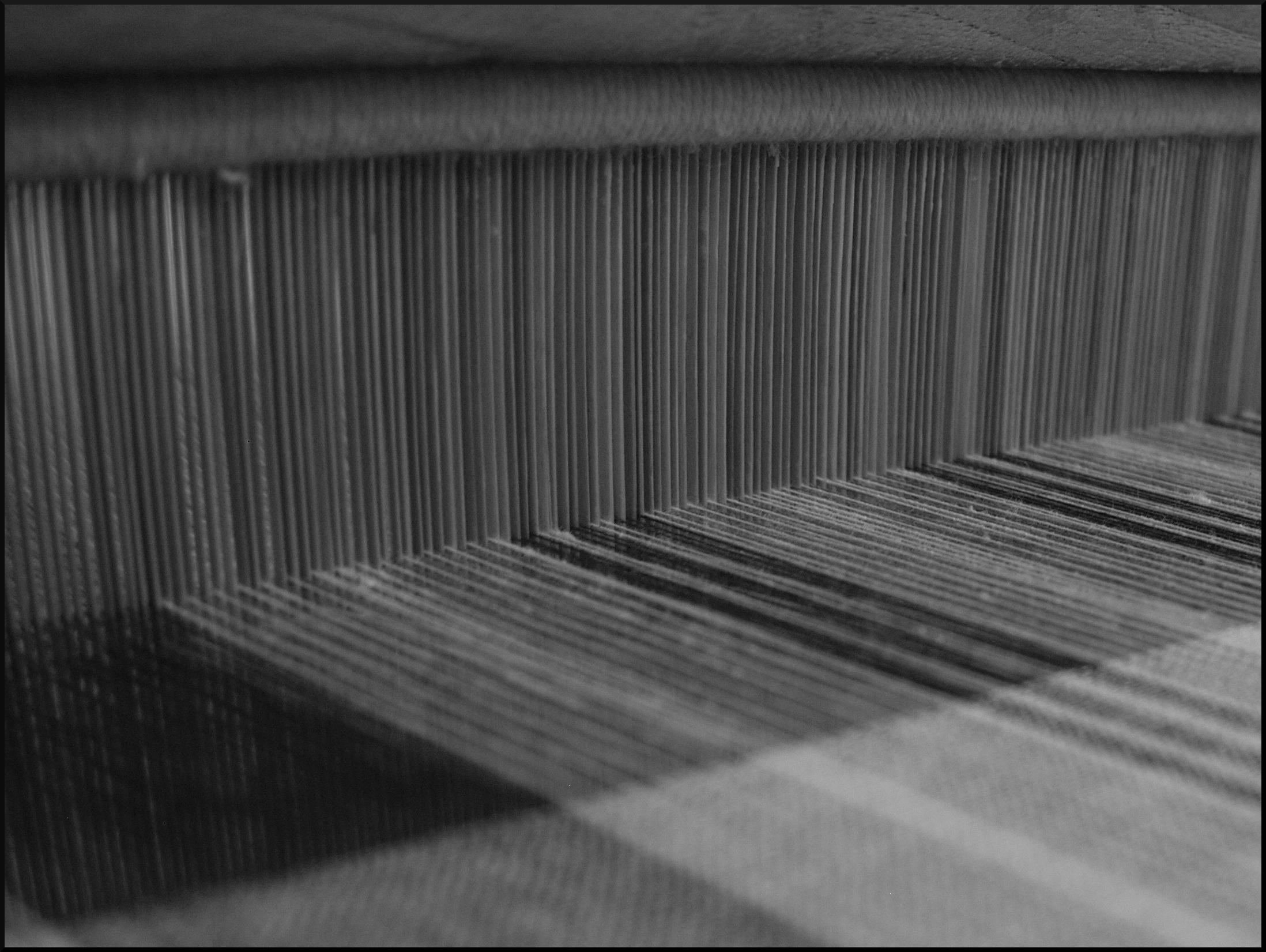 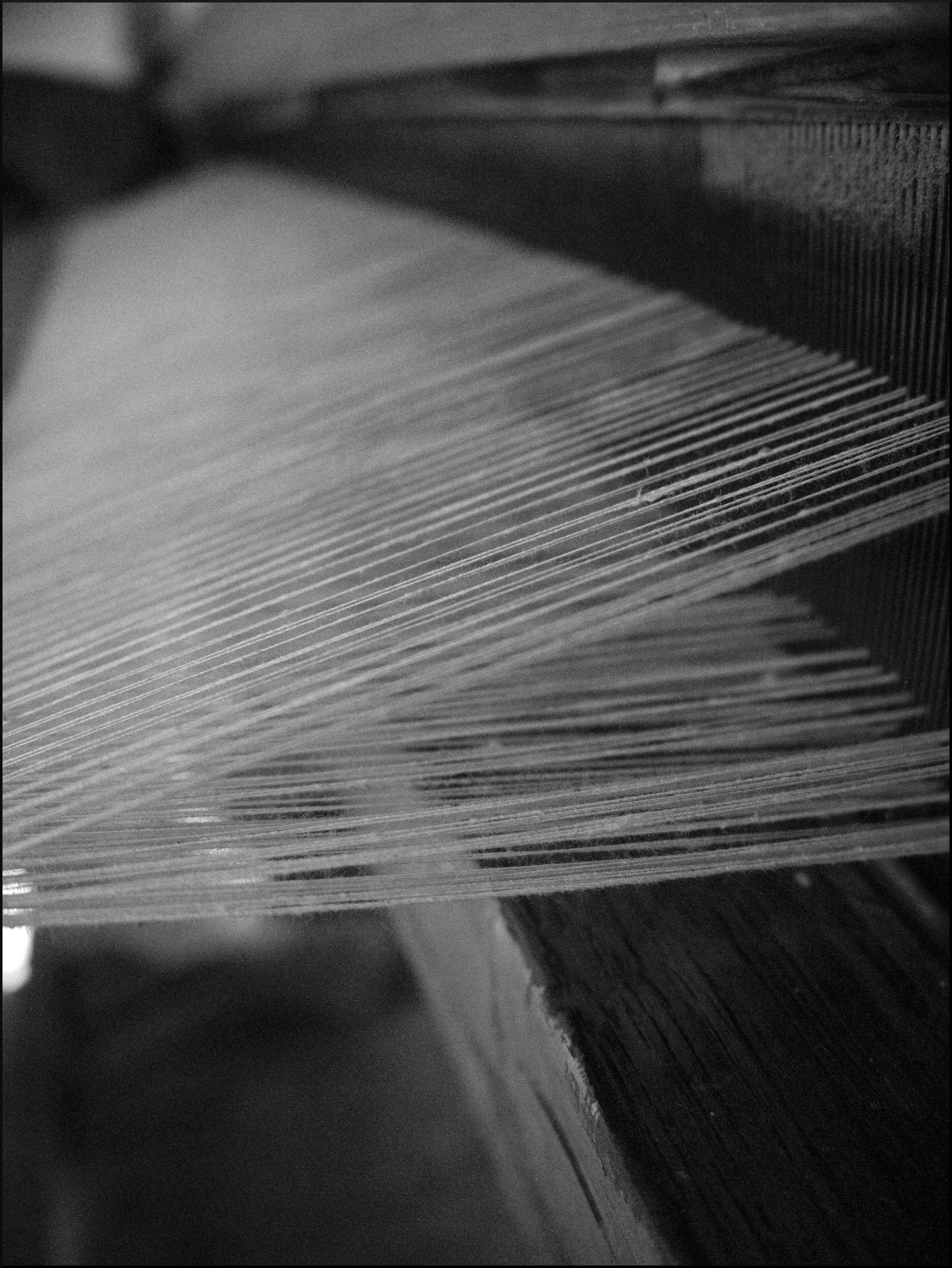 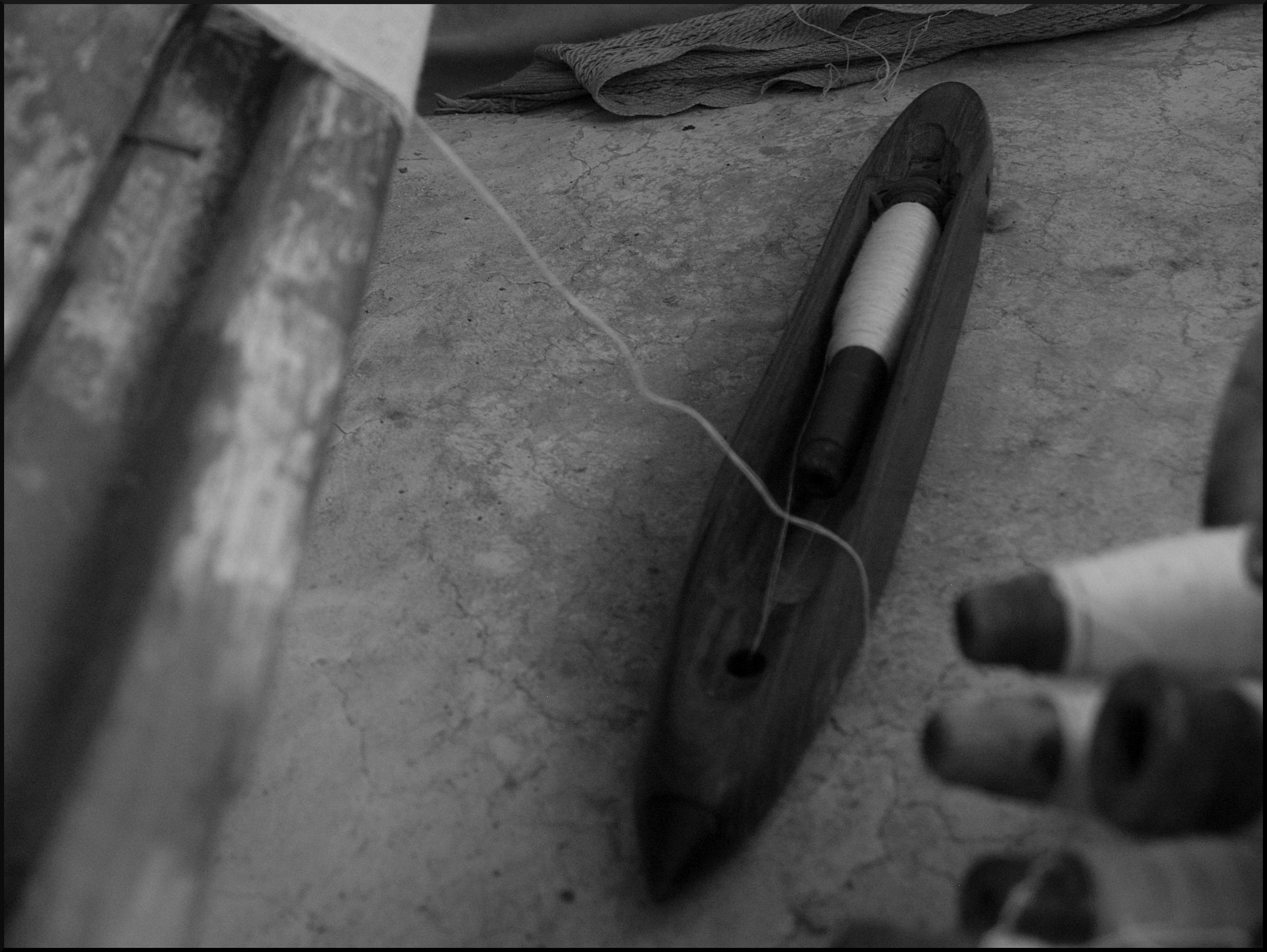